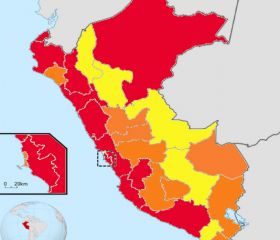 Peruvian fruit producers are hoping that a mild La Niña weather phenomenon will have a positive effect on Peruvian fruit exporters in 2018 following the disruption caused by El Niño last year.

Gabriel Amaro, executive director of the Association of Agricultural Producers’ Organisations (Agap) told El Comercio that the magnitude of La Niña – when the sea temperature falls between 1 and 2oC – would be decisive in determining the impact it would cause on the country’s fruit production.

“If we have a gentle La Niña this would be beneficial for exports of all fruits, but if the effects are more extreme then it would not be good for anyone,” he told the newspaper, adding that he remained optimistic about the outlook for 2018.

Agap said a clearer picture of La Niña’s severity would emerge in February.

However, exports of blueberries and avocados rose sharply last year as planted area continued to expand and access to new markets increased. Agap said the volume of blueberries, avocados and mangoes shipped between January and November 2017 rose by 54.1 per cent, 27.2 per cent and 15.8 per cent respectively.

Amaro estimated that the overall growth in fruit and vegetable exports last year could be below the 11 per cent increase achieved in 2016.