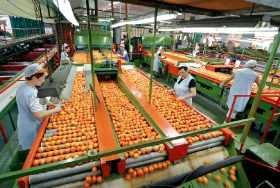 China’s threat to impose a 15 per cent duty on US citrus in the escalating trade dispute over aluminium and steel tariffs could benefit Spanish exports in what remains of the current season, according to one shipper.

Nacho Juárez of Anecoop, one of the leading suppliers of Spanish citrus to the Chinese market, said oranges would be the main beneficiary of the dispute since the mandarin season is almost over.

He noted that the Chinese market had become somewhat complicated in recent weeks due to the high price of Spanish and US Navels, abundant arrivals of Valencia Late oranges from Egypt and the presence of domestic oranges on the market.

“This will probably serve as a readjustment of a market rather than creating a new opportunity because Spain is already an important presence in China,” Juárez told Fruitnet. “But there will undoubtedly be a reactivation in orders, which had slowed down recently. In fact we are seeing it already.”

Lane Late and other Navels such as Powell, Chislett and Barnfield are the varieties most likely to benefit, Juárez said, since “the Chinese market places a greater value on Navels than it does on Valencias”.

Spanish citrus exports to China have risen sharply during the past three years as their popularity among Chinese consumers continues to grow. Navelina and Navel oranges account for the bulk of shipments, which this season are on course to reach 40,000 tonnes.

The US has also increased its presence in China and the market now ranks as the third destination for California citrus behind Canada and South Korea.