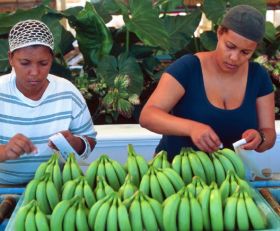 The Association of Dominican Banana Producers (Adobanano) has asked the Central Government to help hundreds of its members located in the Línea Noroests and Azua regions who have seen their sales fall by more than 40 per cent in recent months.

Salvador Estévez, president of the association, said growers had not been able to sell more than one-third of their production volume and that about 120,000 boxes of bananas were being left behind in the country every week due to the lack of buyers.

“We have asked the central government to buy about 80,000 bunches from us every week and give them away in their social programmes to the Dominicans, as a way of helping hundreds of producers to avoid total bankruptcy," Estévez said.

He indicated that the situation could get worse, since at the end of this month and at the beginning of August, between 5 and 6 million additional bunches will enter the national market as a result of the additional production coming from areas that were planted in the months of October and November of last year.

Estévez said that the drop in exports of bananas is partly the result of schools in North America and Europe entering the holiday period.

Producers are gravely concerned since they fear they will not be able to meet their loan repayments after being granted more than 2bn pesos in credit following the destruction caused by Hurricanes María and Irma in 2017.

The president of Adobanano thanked the Agricultural Bank of the Dominican Republic for easing the conditions for the producers who have loans with that entity.