A robot boat has successfully crossed the Atlantic, advancing prospects for automated shipping 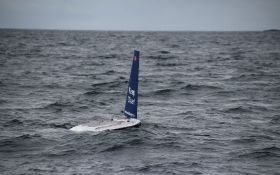 A robot boat has successfully crossed the Atlantic after completing a two-and-a-half-month voyage from Canada to Ireland, advancing the prospect of automated shipping, reports UK newspaper The Telegraph.

Offshore Sensing AS, a technology company based in Bergen, Norway, built the Sailbuoy Met to compete in the Microtransat Challenge where it began its journey in Newfoundland, Canada, in June.

The vessel then travelled east to become the first unmanned sailboat to cross the Atlantic, reaching Ireland on 26 August, according to The Telegraph.

Over 20 teams had previously tried and failed to complete the race, with boats getting trapped in fishing nets or losing their way, the report said.

“The reason for the Atlantic crossing was one, nobody’s done it before and two, it’s a very challenging crossing,” David Peddie, chief executive of Offshore Sensing, told The Telegraph.

The success of the Sailbuoy Met marks a significant achievement in automated sea transportation, however Peddie is cautious about scaling up the size of the vessel.

"A bigger unmanned robot boat would require a much stronger hull to withstand the harsh conditions of the ocean, as well as new regulations to prevent collisions with other vessels such as cruise liners or oil tankers," he said.