Exporters are reaching more markets than ever before, says Sergio del Castillo of Procitrus 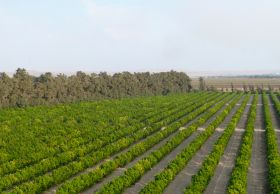 Strong demand in key markets like the US and China will help lift Peruvian citrus exports to a new record in 2018.

Although the final-season tally is not yet in as the orange season is still in full swing, the latest data from Procitrus reveals a shipment total of 165,774 tonnes to week 35, compared to 144,684 tonnes for the same period of 2017.

Mandarins, which make up the bulk of Peru’s citrus export offer, grew 16 per cent to 129,036 tonnes. The category is spearheaded by Murcott, which continues to dominate the late season window in the Southern Hemisphere.

“We were aiming for 15 per cent volume growth across the category and should achieve this,” Procitrus’s managing director Sergio del Castillo told Fruitnet.

Limes also put in an impressive performance, with Persian lime exports almost doubling to 4,931 tonnes and sweet lime shipments rising 36 per cent to 4, 021 tonnes, mainly due to growing interest in Chilean market.

There have been efforts to diversify into new markets like the US and Europe, where Peru could fill the window when there in no Mexican product in the market, but del Castillo said ensuring that the fruit achieves the right colour when reaching such distant market is a significant challenge.

Europe once Peru’s biggest citrus market, has been overtaken by North America which now absorbs 46 per cent of the export total. While there is little room for growth in a market as mature as Europe, del Castillo was optimistic about the long-term outlook in the region.

“I don’t think that annual volumes to Europe will go down – on the contrary, they will continue to increase over time but at a much slower rate than in North America and Asia,” he said.

Asia in particular, is showing tremendous potential. China was the first market to open up in 2010, and now accounts for 6 per cent of Peru’s export total.

More recently, access has also been secured to Indonesia and Malaysia, while negotiations with Japan on the import protocol for Satsumas are due to be concluded some time next year (unlike other markets, Japan negotiates access on the basis of variety). Talks are also ongoing with countries like Vietnam, Thailand, South Korea and the Philippines.

“India is the latest Asian market with which we have started negotiations, but unlike other countries, the process has been very fast and we are already at a very advance stage and hope to sign the protocol very soon,” said del Castillo.

Once access to these markets has been secured, the biggest hurdle that shippers face is the cold treatment during transit, which subjects the fruit to a lot of stress and increases transportation costs, eroding Peru’s competitiveness.