Can Flying Swans get off the ground?

Will a Dutch consortium succeed in coming to the rescue of South Africa's embattled citrus industry? 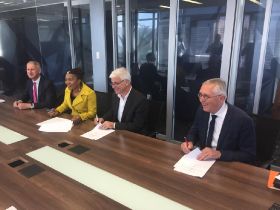 The Flying Swans group held meetings in the country this week, prompting further speculation that much-needed improvements to transport networks could be a step closer.

Representatives from the South African citrus industry took part in a workshop in Letsitele, Limpopo province, where they discussed inefficiencies in logistics and ports that have threatened the smooth shipment of this year’s harvest.

The participation of Flying Swans, which was created several years ago to help Dutch business succeed in developing markets in Africa, Asia and South America, is especially significant, given one of its stated aims is to promote better logistical links between Africa and Holland.

South Africa is set to play a key role in the group's plans, which promotes rail shipments of citrus from the northern regions via the ports of Cape Town and Durban.

This week, representatives from both countries signed a letter of intent to cooperate on agricultural logistics.

Dutch bank FMO, consultancy Mercator Novus, maritime services company Boskalis and the Port of Rotterdam have also previously given their support to the collaboration.

Citrus industry spokesman Mitchell Brooke told Fruitnet there was still much to discuss before talking further about the agreement, while Liphadzi was unavailable for comment.

The new developments come at a time when the citrus industry is experiencing another year of low efficiencies in the port of Durban, which is resulting in a most difficult export season.

The CGA has long been promoting rail as an alternative for congested roads, as well as increasing use of the Port of Maputo to alleviate pressure in Durban.

Brooke recently said that alternative options are urgently needed because the problems in Durban were likely to flow over to other ports. However, plans to use more rail transport have so far not proved successful.

Some remain sceptical about the Flying Swans' prospects when it comes to solving problems in South Africa's citrus logistics, but the industry has generally welcomed and supported CGA's efforts, for example the introduction of break-bulk shipments to Japan and China to reduce pressure on container terminals.

It has also generally supported initiatives designed to bring about progress and greater efficiency. However, it remains to be seen whether this latest initiative will succeed where others have failed.

One other potential difficulty, in the present economic climate, could be a reluctance to fund major infrastructure development in South Africa on the part of parastatals like Transnet, which is currently subject to a major corruption inquiry over a deal to import new locomotives from China.

The case has reportedly cost the country billions of rand, prompting some to doubt its ability to secure new investment funding.