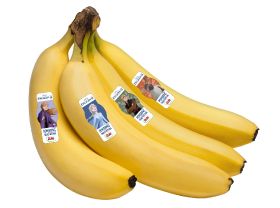 Dole is celebrating the launch of Disney’s Frozen 2 with what it has called its most ambitious healthy-lifestyle campaign since entering into a long-term nutritional alliance with The Walt Disney Company in 2016.
Kicking-off this month and continuing through December 2019, Dole’s latest installment of its 'Empowering the Hero Within' initiative employs a number of consumer activities to make it easier for parents to motivate their families toward healthy living with menu options rich in fresh fruits and vegetables.
“Our goal is to warmly embrace the universal appeal of Disney’s Frozen 2 and the film’s themes of family, fortitude, responsibility and the awesome power of nature to help create healthier household routines that can lead to long-term, positive changes in behaviour,” said William Goldfield, Dole’s director of communications. “More important, we want to combine the powers of Dole and Disney’s Frozen 2 to make healthy eating fun, exciting and maybe even a bit magical.”
As a centerpiece of the programme, Melanie Marcus, Dole’s nutrition and health communications manager, created 20 new fruit-and-vegetable-based recipes – including entrees, side dishes, salads, soups, sandwiches, smoothies and desserts inspired by Elsa, Anna, Olaf, Kristoff and Sven from the film.
“Most parents want nothing more than to establish the healthy eating and living routines for their kids that will last a lifetime,” said Marcus. “I’m a new mom, and giving my daughter a healthy start is the most important thing to me. But life is busy and schedules are full – so we developed a series of family-friendly breakfast, lunch and dinner recipes that were designed to be prepared in advance and frozen. Now, working parents can ensure their families get the fruits and veggies they need every day of the week – and, thanks to Disney, love doing it.
“While Dole realises that families can’t correct many of the nutrition mistakes of the past, we’re committed to offering them the tools to shape their destiny towards a healthier future," she added.
Dole is using a host of expanded tactics to distribute its new recipes including print and digital placements, how-to recipe videos and social enhancements. Other campaign elements include a dedicated campaign web page, digital banner ads and social media posts.
The fresh produce leader is also partnering with top-tier family, health and fitness bloggers and social influencers to host Disney’s Frozen 2-themed contests, recipe-development initiatives and other programmes.
The most visible element of the programme will be the millions of Dole bananas and pineapples featuring images of Anna, Elsa, Olaf, Sven and Kristoff in the produce departments of supermarkets throughout the US and Canada.
Carl Collen
comments powered by Disqus