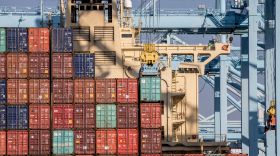 The Port of Los Angeles moved 9.2m TEUs in 2020, its fourth largest annual total on record.

The port’s third- and fourth-quarter 2020 cargo volumes increased by 50 per cent when compared to the first half of the year, with the port handling 94 per cent more traffic in the week before Christmas than the same week a year prior.

“Our container business in 2020 was the most erratic we have ever seen, with volumes plunging nearly 19 per cent in the first five months of the year, followed by an unprecedented second-half surge,” Seroka said at the Pacific Merchant Shipping Association’s sixth annual State of the Port of Los Angeles event on Thursday (14 January).

“Our ILWU longshore workforce did a great job adapting to the huge swings in volume, as did port truckers and everyone else involved in moving cargo through our port. In a year of great difficulty, we are extremely grateful for the tenacity and resolve of all of our partners.”