Avocados From Mexico reminds consumers that “if there’s no guac, there’s no Cinco” 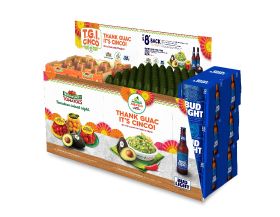 Avocados From Mexico (AFM), the number one avocado brand in the US, is launching a new 360 marketing campaign to celebrate next month’s Cinco de Mayo celebration.

Cinco De Mayo is the second-biggest consumption period of the year after the Super Bowl, but according to a survey conducted in December 2020, 43 per cent of consumers skipped their celebrations last year due to the pandemic.

The new campaign features a TV commercial that comically depicts why AFM guacamole is always at the centre of any Cinco celebration.

The advert reminds consumers that AFM is the go-to brand for Cinco good times by portraying a man who clones himself in order to enjoy “double the Cinco” by doubling up on the guacamole to make up for the “lost Cinco”.

“We’re looking forward to leading the charge with consumers as they make up for last year by putting AFM guacamole at the centre of their celebrations…Thank Guac It’s Cinco!”

AFM will provide grocery retailers across the country with eye-catching displays that also feature two other components of a Cinco de Mayo celebration, Bud Light and NatureSweet Tomatoes.

“There is a high occurrence of co-purchase between avocados, tomatoes and beer thus making Bud Light and NatureSweet the perfect partners for Cinco,” said Stephanie Bazan, vice president of trade & market development.

“Our research shows that in the 10 days leading up to Cinco, basket ring with avocados is more than two times greater compared to baskets without avocados,” said Bazan.

“Additionally, we observed that US consumers last year bought 20 per cent more pounds of avocados during the week leading up to Cinco de Mayo than in the prior year. Our retail displays are meant to drive shopper engagement and increase units per trip.”

With the growth of bagged fruit, Bazan said that AFM wanted to encourage retailers to include bagged avocados in their holiday displays, noting that “bags drive more units per trip, and they represent a perfect solution for shoppers looking to make guacamole for their Cinco celebrations”.

This Cinco, AFM is also serving up guacamole inspiration and rewards through their TGICinco digital hub featuring a Guac Style Analyzer that determines guacamole recipe recommendations based on the users’ personalities. Consumers can share their results on social media using #TGICinco for the chance to win prizes.

Rounding out AFM's 360 approach, the brand will join forces with On The Border, a chain of Tex-Mex food casual dining restaurants, to launch a Cinco programme for the entire month of May.