Record May for Port of LA 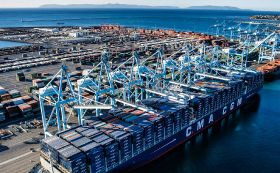 The Port of Los Angeles processed over 1m TEUs in May, a leap of 74 per cent compared to the same period last year.

It was the busiest month in the port’s 114-year history and the tenth consecutive month of year-over-year increases.

Empty containers climbed to 366,448 TEUs, a jump of 114 per cent compared to last year due to the heavy demand in Asia.