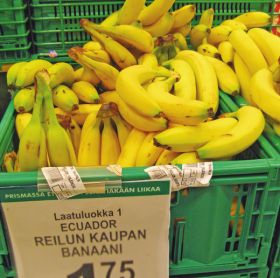 Ecuador has said that it would not hesitate to impose trade sanctions on the European Union if the long running banana import dispute is not settled.

The country is calling for the EU to honour an agreement it reached with Latin American countries during July's Doha round of WTO talks in Geneva, Switzerland. The deal, which would have seen banana tariffs cut to €114 per tonne from the existing €176 per tonne, fell through amid the collapse of wider talks.

If a deal fails to materialise, Ecuador could impose barriers by lifting intellectual property rights on EU products such as software or music, Reuters said.

"For a developing country like Ecuador, this legal battle has involved millions of dollars in lost sales, excessive duties and litigation costs," Cesar Montano, head of Ecuador's World Trade Organisation (WTO) mission, told the WTO's Dispute Settlement Body. "These resources could have been directed to the fight against poverty and the development of my country."

Latin American exporters such as Costa Rica, Ecuador and Panama have repeatedly called for a change in the EU tariff, arguing that it unfairly favours African-Caribbean-Pacific (ACP) countries. Many ACP nations are former colonies of EU countries, with their bananas enjoying tariff-free access to the European Union.

The WTO recently backed Latin American nations in the long-running dispute, dismissing an EU appeal against a ruling that the tariffs broke global commerce regulations.