Retailers shut down in Venezuela 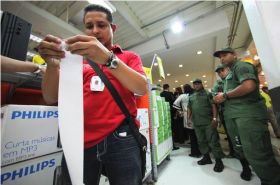 In Venezuela, government inspectors accompanied by soldiers temporarily shut down dozens of retail stores on Monday in an attempt to prevent big price increases following the devaluation of the country’s currency, according to the Associated Press.

Three large stores of the Exito hypermarket chain, majority-owned by France-based Casino Guichard Perrachon SA, where shut down for 24 hours.

President Hugo Chavez says that the currency change will discourage imports of non-essential goods and encourage domestic production of items such as food.