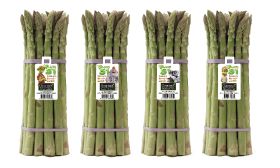 Gourmet Trading Company has announced in a press release the launch of a new promotional campaign in conjunction with the DVD and Blu-ray release of Sony Pictures Home Entertainment’s (SPHE) new animated film Planet 51 on 9 March.

The company said it is looking to expand asparagus consumption among children by “capturing the nag factor” through featuring iconic characters from the film on Gourmet-branded asparagus packs for one month.

“We are truly excited about this promotion,” said Julia Inestroza, marketing manager for Gourmet Trading. “As asparagus has been traditionally thought of as a vegetable only consumed by adults it will be great to bring a new demographic into the mix.”

“We are extremely excited about our alignment with a healthy food partner like Gourmet Trading Company as it offers better food choices for families combined with a great value offering.”