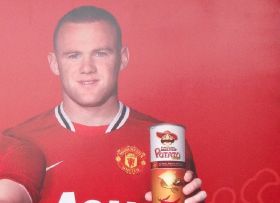 Mr Potato is currently the 2013 English Premier League champions' official snack partner, a partnership that has seen a number of the club's first-team players engaged in promotional activities in support of the brand.

The revelation that Rooney is to be featured in a special advertising campaign over the coming months is likely to raise a few smiles, since his face is widely regarded as bearing more than a passing resemblance to a potato.

The campaign itself has begun in Malaysia and is expected to be rolled out across Asia and Latin America.

The fact that Rooney appears on new posters not only holding a tube of Mr Potato crisps but also wearing Manchester United's new strip would suggest that, contrary to reports, the club does not believe the player has had his chips.