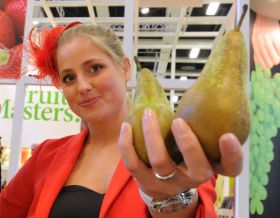 Exporters in the Netherlands are celebrating two major breakthroughs in Asia after securing an initial agreement on access for pear shipments to China, as well as a potential resumption of onion exports to Indonesia.

Although neither agreement has been officially signed off, representatives from Dutch export association Frugi Venta and promotional body Holland Fresh Bureau told Eurofruit the developments were "very promising".

The deals were forged during high-level talks on two separate visits to China and Indonesia earlier this month, involving more than 100 Dutch companies led by Dutch Prime Minister Mark Rutte, the country's Minister for Foreign Trade and Development Cooperation Lilianne Ploumen and Sharon Dijksma, State Secretary for the Ministry of Economic Affairs.

Once signed, the Netherlands will be free to send Conference pears direct to China, a hugely significant result that follows five years of talks between the two countries.

"It's a very positive development marking the closure of a long period of negotiations that started in 2008," said Inge Ribbens, policy officer for international affairs at Frugi Venta. "However, we still have a lot of work to do."

While the agreement with China has not yet been signed, there is now a tacit understanding between the Dutch and the Chinese authorities as to the proposed contents of the protocol.

"We don't have a specific date for when we will be able to begin shipping our pears to China, because there is a lot still to work out."

To that end, a trade mission from China is expected to visit the Netherlands in the next few months, with plans to visit a number of sites involved in the pear export business.

As for onions, shipments to Indonesia will almost certainly begin next year, Ribbens confirmed.

The country has had access to Indonesia for its onions in the past, but previously fell foul of "severe" phytosanitary restrictions that have been "getting more and more strict" during recent years.

"Traditionally our export season to Indonesia begins in October," Ribbens told Eurofruit, "so it's probably too soon to send them this year, but in 2014 it should be possible."