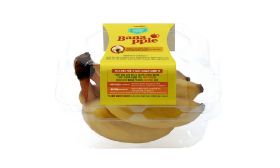 Leading Korean retailer E-mart has seen its sales of hybrid fruit increase in the first half of 2015 as consumers seek out unique and sweet tasting fresh produce, reports Korea Joongang Daily.

“We started selling the new breed of fruits to cater to consumers who are looking for new kinds of fruits and enjoy purchasing them,” an E-mart official told the Korean news site.

E-mart’s sales of ‘banapples’ – a cross between an apple and a banana, increased 86.7 per cent, while its sales of regular bananas fell 17 per cent.

Soon to be on offer at the E-mart stores will be cherry-plum hybrid ‘Nadia’ plums, which are grown in Anseong, Gyeonggi, Geochang and South Gyrongsang.

“Once Nadia plums’ planting and production stabilise in Korea - we expect that to be within four to five years - we are thinking of exporting local production overseas,” said Shin Hyeon-woo, a fruit buyer at E-mart. “We will work proactively to introduce better tasting fruits in our markets.”