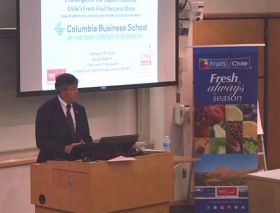 The president of Chilean fruit exporter association has accused Zespri of anticompetitive practices that go against the principles of free trade.

Speaking at a lecture at Columbia University Business School in New York which formed part of Chile Week USA 2016, Ronald Bown said it was “unbelievable that in a time when markets are opening up and free trade agreements being signed there are countries that endorse backward-looking commercial structures that allow companies to operate in a way that are against free trade”.

The Chileans have long argued that Zespri’s ‘Single Point of Entry’ marketing structure goes against the interests of consumers and harms the global kiwifruit industry and Chile in particular.

Bown said the fact that Zespri controls 30 per cent of the global kiwifruit market in volume and 60 per cent in value negatively affects producers in Chile, as well in other major producing countries like Italy, France and Greece.

“It is incomprehensible that these practices still exist today and that country that support them are allowed to be part of free trade pacts such as the Trans-Pacific Partnership,” he argued.

The Asoex president claimed that Zespri’s actions also have a detrimental effect on consumers and importers because it leads to higher prices and limits access to fruit from other origins.

Bown said Zespri’s actions are not just limited to anticompetitive behaviour, noting that the marketer had been accused of customs fraud in the South Korean market, while its strategy to award licenses to producers in other countries to grow new varieties for free in order to control local supply is currently under investigation.

A spokesperson from Zespri said: "Consumers and customers around the world have a wide variety of choice about the fruit they buy and consume and Zespri Kiwifruit provides a premium quality, healthy, tasty option. Sales are set to grow strongly, as more and more people chose the great taste and consistent quality of our healthy products.

"Zespri is proudly owned by NZ kiwifruit growers and our structure complies with international WTO laws."