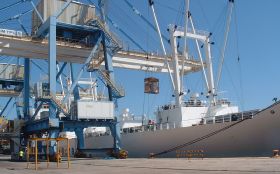 Spanish fresh produce exporters are turning to Portuguese ports to reduce the impact of a planned strike by stevedores next week.

“Companies who rely on the Spanish port system are going to find it very difficult to plan weekly shipments as we still don’t know exactly what impact the walkout will have,” said David Reynau, export director at Valencia-based export consortium Consorfrut, which has extensive programmes in Asia and other overseas markets.

“Like many companies, we are trying to divert as many containers as we can to the Port of Sines. For the rest, we’ll just have to deal with issues as and when they arise. But what we can be sure of is that the next few weeks will require a huge effort to overcome problems such as delays and cancelled services,” Reynau told Fruitnet.

Consorfrut is gearing up to make its first stonefruit shipments to China this summer and will be keen for a rapid resolution to the strike.

"We are indeed receiving contacts from major forward agencies in order to process customs declarations in Portugal, although we can’t quantify the real impact at the moment," said Sérgio Almeida of customs broker Fernando Coelho, which has offices in Sines and Oporto.

"We are also expecting major shipping companies to reroute their lines to Portugal or other countries. But the real impact will be seen when the strike starts - before then we can't predict how companies will react."

Almedia pointed out that the resulting overload in Portuguese ports would likely bring some chaos, as occured last year when Portuguese port workers went on strike, resulting in traffic being diverted from the Port of Lisbon to Oporto and causing major delays.

The International Workers’ Federation has called a strike on alternate days for nine days over a three-week period from 6 March in response to the government’s decision to pass new legislation to liberalise the sector following a ruling by the European Court of Justice forcing Spain to end to the stevedores’ stranglehold on the industry. The bill is due to be approved by the Council of Ministers today.

Meanwhile, sources at Barcelona wholesale market Mercabarna, which houses more than 700 food companies, said it was still too early to predict what the full impact of the strike will be. One company pointed out that since the strikes are scheduled for alternative days, shippers would do their best to dodge the days of the walkouts.

“They are used to coming up against these kinds of problems at ports and have other options,” the source told Economía Digital.

Another company noted that the Port of Rotterdam could be used as an alternative point of entry and exit for fruit if the conflict was not resolved swiftly.