Growing demand for tropical fruit among number of new options for country to consider, says head of trade fair Macfrut 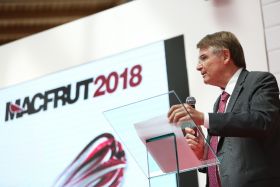 RP: There are lots of individual exhibitors taking stand space at Macfrut. It’s worth noting in particular the presence of major international grocery chains such as the German group Rewe, which will bring buyers from all of the countries in which it is present, Edeka, Austrian group Spar, the Portuguese company Jeronimo Martins, Polish operator Biedronka, Carrefour Romania, Lulu in the United Arab Emirates and lots of other chains.

RP: Our Macfrut presentation tour has made an unprecedented effort in visiting 20 countries on four continents. We have presented the fair in North America, at the International Banana Congress in Miami and at PMA in New Orleans; in Peru, Chile and Colombia in South America; and in Zambia, Ethiopia, Uganda and Tanzania in Africa. In addition, we’ve been to Asia (China, Uzbekistan, Kazakhstan, Hong Kong) and the Middle East (Dubai), not forgetting Europe where we’ve held roadshows in Bulgaria, Serbia and Croatia, while giving presentations in Spain (Fruit Attraction) and Germany (Fruit Logistica).

RP: There is still much, very much to do. Here’s another figure: Italy’s exports grew 2.5 per cent in 2017, going above the €5bn threshold. So, good, that was a record. One fact remains, however: 94 per cent of our exports are aimed at Europe. Broadening Italian produce’s reach is increasingly vital for us, which is why other markets, starting with China, have been central to Macfrut for some time. Next November in Shanghai, we will host 30 leading international food buyers invited in partnership with Cibus. It’s essential that we manage to remove phytosanitary barriers blocking Italian apples and pears as soon as possible, so that we can widen the range of our products on their tables.

RP: Interest in exotic fruits is increasing more and more in Europe, with the numbers showing double-digit growth. In Italy, for example, this kind of fruit has become so important to the point of now being included in Istat’s basket [of consumer goods]; and in fact, avocado consumption has increased 23 per cent. More generally, across Europe imports were 340,000 tonnes in 2016, with a forecast for 517,000 tonnes in 2018. Mangoes and avocados fit in perfectly with the new health trends, which explains the staggering rise in demand. The Tropical Fruit Congress, the first in Europe hosted by Macfrut, aims to be a meeting point between demand and supply at a global level: a trade fair makes sense if it knows how to bring together innovation from the world of food business. The event was conceived as a one-off, but maybe it could be repeated with a focus on other fruit categories.

RP: In the south, in Sicily and Calabria primarily, there are excellent opportunities to produce mangoes and avocados. We’re talking about areas that for decades have been dedicated to production of oranges, a product that nowadays doesn’t earn a great deal. There are some big opportunities ahead for Italian producers, with global demand rising and a real transport revolution involving perishable products like exotic fruit. Today, the system can carry even modest volumes of produce in refrigerated containers, which enables small and medium-sized producers to open markets too.

RP: I am confident, but a lot depends on the mentality of those involved. There are supply chains like those for kiwifruit, apples, pears, table grapes and different kinds of vegetables that are among the most appreciated in the world. It’s definitely necessary for companies to know how to seize opportunities presented to them by globalisation. Logistics, let me repeat, allows you to reach the whole world in short times and at reasonable cost: you cannot remain confined to the same patterns, which are often psychological rather than geographic.