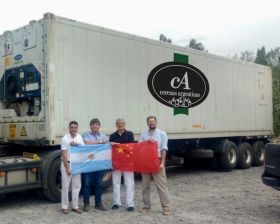 Chinese inspectors continued their visit to Patagonia’s Río Negro province on Tuesday to monitor and authorise the first shipment of Argentine cherries to China following the signing of the phytosanitary protocol between the two countries at the end of last year.

Two of the producers involved, Cerezas Argentinas and Frutos de los Lagos, each loaded a container of Sweetheart cherries, a late-season dark red variety with a high brix and a firmness that makes it ideal for withstanding long transits.

The containers will be trucked to Chile from where they are due to be loaded onto the Cherry Express service on 14 January.

Both companies are part of a group of Argentine and Uruguayan grower-exporters led by president and board director Adolfo Storni. The same group is sending another shipment by air, which is due to arrive in China on 11 January.

“This first shipment is the result of the joint work of various entities, including Senasa, the Ministry of Production, Argentine Embassy in China, Foreign Ministry, Argentine Chamber of Integrated Cherry Producers (CAPCI), the producing provinces, national government entities and the private sector,” said Storni.

“Our cherries stand out for their safety, quality, excellent size, colour and sweetness. China is the main importer of cherries worldwide and the strengthening of the commercial relationship with this country will allow us in the future to consider it our main market.”