Amazon pulls away from rivals 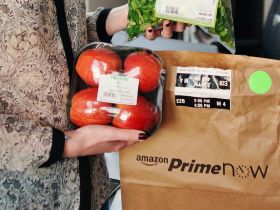 Amazon has once again been ranked as the world’s most valuable retailer according to a new industry report.

In addition to calculating overall brand value, the report also determines the relative strength of brands through a balanced scorecard of metrics evaluating marketing investment, stakeholder equity, and business performance.

Amazon remains the standout brand, growing 25 per cent to US$187.9bn, its ever-diversifying portfolio leaving its competitors trailing in its wake. The recent announcement of Amazon’s new grocery store business across the US immediately hit rival retailers shares including multinational giant Walmart, whose own brand value rose 10 per cent to US$67.9bn, and supermarket chain Kroger, also up 8 per cent to US$5.6bn.

“Amazon is continuing to grow at an unprecedented rate, through snapping up more strategic acquisitions across a huge variety of businesses: from home security brand Ring to online pharmacy retailer PillPack. Amazon’s dominance over the retail space emphasises the strength of the e-commerce giant as it leaves competitors in the traditional bricks and mortar space lagging further behind,” said David Haigh, CEO of Brand Finance.

China’s Alibaba and JD.com, ranked 10th and 11th respectively, faced mixed fortunes. With both brands facing growing uncertainty due to a slowdown in the Chinese economy and the US-China trade war, Alibaba nevertheless saw its brand value rise by 51 per cent to US$14.6bn, while JD.com’s was down 42 per cent to US$11.4bn.

JD.com’s reputation took a hit following the high-profile coverage of the arrest of its CEO, impacting both its customer base, which shrank for the first time in four years in November 2018, and its share price, which fell 6 per cent overnight as the news broke.

Striving to diversify, the brand has recently announced partnerships with Google Express, to increase its footprint in the US, and with Rakuten to develop drone delivery, however it remains to be seen what the impact of these ventures will have on its brand value in the coming year.

Alibaba is also continually looking to diversify its offering with a variety of initiatives, including its partnership with NBA China which is now starting to bring NBA content to Alibaba platforms and boost online shopping opportunities for Chinese consumers.

Alibaba has forged a number of partnerships with global brands including Starbucks, boosting its delivery and digital presence in China, and Intel, collaborating on hybrid cloud, internet of things, and smart mobility.

Tesco was the highest ranked UK retailer, claiming 12th place – unchanged from the previous year. Marks & Spencer fell out of the ranking, with the report finding that its brand value had fallen by 15 per cent.

The Canadian multinational chain of convenience stores, Circle K, is the fastest growing brand in the retail rankings with an impressive 60 per cent increase in brand value to US$5.9bn.