Nina Patil's grape company is quietly bringing about social reform, one sustainable farm at a time, to the women of western Maharashtra 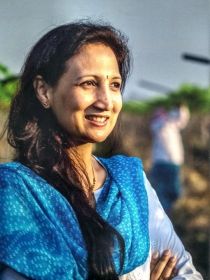 India has a rich history of reformers: those altruistic individuals who seek to leave their world a fairer, better place. Raja Ram Mohan Roy, known as the father of modern India, was one of many 19th century Indian pioneers to fight for human rights. His contemporary, Jyotiba Phule, suffered ostracism to open the first school for girls in India in 1848. And in 1856, Ishwar Chandra Vidyasagar succeeded in improving the lot of Indian widows – whose lives had literally been saved by Roy’s legal legacy some 30 years earlier. Then, of course, there’s Mohandas Karamchand (Mahatma) Gandhi (1869-1948), who inspired civil rights movements across the globe.

Perhaps it’s no surprise to learn, then, that this trailblazing tradition continues in India today. In Fresh Express’s case, quietly and resolutely, among its lush vineyards in western Maharashtra.

Fresh Express is an Indian grape grower-marketer with a conscience. Set up some 25 years ago by husband-and-wife team Ranjeet and Nina Patil, the company is passionate about empowering its local 600+ peak-season, mostly female workforce and promoting a ‘green’ revolution in the drought-ridden region through sustainable farming methods. It lives and breathes its slogan: ‘Naturally-farmed Fairtrade fresh produce fuelled by Women Power!’

Reform is the lifeblood of the organisation. Indeed, it was Nina’s realisation that grape farming could be a force for change that ultimately convinced her to embark on the venture at the tender age of 21.

“I was a reluctant entrant as I had no business experience at all,” she reveals. “I graduated in psychology and did my masters in social work, so this was quite an alien world to me. But once I noticed almost 99 per cent of workers in the fresh trade are women, be it in fields or packhouses, and realised the number of lives that could benefit from socially-responsible initiatives like natural farming, women and youth empowerment and financial literacy, that we as an organisation could passionately promote, I was enthused.”

While not from a fresh produce background per se, horticulture provided the backdrop to her past. Nina grew up among her father’s verdant tea plantations on the slopes of Assam, then married into a family who grew grapes in Maharashtra for the domestic market. She credits her parents for “planting the seeds” of social consciousness in her from a young age, and her father-in-law for proving that sustainable farming (by which she means using minimal chemicals, organic fertilisers and rainwater irrigation) is possible, even in the harshest of conditions.

“I like to say my journey has been from hills to vines,” Nina says, whose role as Fresh Express co-director is to ensure the firm’s quality and social standards (Fairtrade, Globalgap, BRC and Sedex Smeta) are upheld in practice.

“I personally like to define my role as making sure every person associated with the organisation is happy, because I strongly believe happy people grow happy grapes.” No mean feat in a firm that annually exports some 4,500 tonnes from 40ha of owned and partner farms to the UK, Europe, Russia and Canada under the Unigrape brand (as well as Fairtrade pomegranates and raisins); and which is poised to open its fourth state-of-the-art packhouse in time for the next grape season.

Yet this route to export success was not always easy. The initial years of setting up a fully-integrated grower-shipping company were predictably turbulent, Nina says, and coincided with the birth of her two sons (now aged 23 and 21, and immersed in the business). “They would get rocked in make-shift hammocks in the car, as we went around surveying farms and meeting farmers in remote areas,” she recalls. Then, some two decades in, Fresh Express hit an impasse with a domestic cut-fruit-and-veg line it had set up seven years earlier, meanwhile Nina felt grape exports were plateauing.

She sought help, and through a local business network got involved in the UK-based Cherie Blair Foundation for Women’s global mentoring programme for female entrepreneurs. It proved to be a turning point for Nina and her company.

Nina’s mentor, a business analyst in London – far removed from the vineyards of Maharashtra – encouraged her via weekly Skype chats to step outside her comfort zone and make tough, objective business decisions that propelled the firm forward.
Within three years of taking part in the scheme, Fresh Express went from exporting to one or two countries, to supplying 17.

“We had to take a tough decision to discontinue our fresh-cut line after seven years of relentless efforts, as the numbers were just not adding up. Giving up this ‘baby’, was not easy. Tracy, my mentor, at that stage, gave me the added courage to be objective and take decisions of even downsizing,” Nina explains. “I reviewed my role in the company and decided to put all my attention into exports.

“I definitely would recommend mentoring schemes to other women leaders, as it's great to get an objective view from a completely new perspective,” she adds. “Mentors don't come with the baggage we tend to carry as we are so steeped in our daily battles.”

Common platforms like the Global Women's Forum in Fresh Produce, launched during Fruit Logistica in Berlin earlier this year, are also invaluable for sharing ideas, networking and mutual support through thick and thin, she adds.

But having the confidence to step outside one’s comfort zone is the key to women achieving leadership positions in the fresh produce industry, Nina believes. “Once we take the first step, we realise the second is not so difficult,” she says.

It’s a similar scenario elsewhere. While there are no official statistics for the global fresh produce sector, a 2013 Eurostat survey found that far fewer women than men were managers in the EU-27 agricultural sector (27.9 per cent), though roughly 50 per cent of employees were female. And on the wider business stage, Catalyst (a US charity working to advance women in leadership) found that in 2018, women accounted for 48.5 per cent of the global workforce, yet very few held top positions: only 24 (4.8 per cent) were CEOs of Fortune 500 companies; and less than 24 per cent had senior roles.

The burning question is, why? It’s nearly 200 years since girls were given access to education in India; 2019 marks the centenary of the law that allowed women to enter the professional workforce in the UK; and it’s more or less 100 years since universal suffrage was granted in the US, the UK and several European countries. Women today clearly contribute to the global workforce in these countries, so why are so few in the top jobs? If leaving one’s ‘comfort zone’ is crucial to getting ahead, why don’t more women do it?

Social conditioning and unconscious bias could be part of the problem, Nina believes; the notion that women ‘take care’, whereas men ‘take charge’. “Males are conditioned and expected to take a dominating role,” she says. “More than a primal instinct, we women bow down to society's expectations of us, sometimes as a compulsion, and sometimes it’s just ‘convenient’.”

Society, and especially women in society, must change this mindset, she adds. “If mothers worldwide firmly believe girls can achieve the same as their boys, and condition boys to respect girls as their equal, we will automatically have more women leaders.

“Women have to believe they are indispensable, because they are!” she adds. “Conquering a fear of failing and stepping out of so-called ‘safe environs’ is vital. We cannot expect a golden wand to change things. Once we decide to get out of that comfort zone and take the first step, the rest will just follow – with all its ups and downs.”

In Maharashtra, Fresh Express is doing its bit to empower local women to achieve their potential by giving them financial independence.

“Around 90 per cent of our workforce – on the farms and in the packhouses – are ladies,” Nina explains. “When we started out, only about five per cent of our female workforce had their own bank accounts. We encouraged them all to have one in their own name so that they can make independent decisions on how to spend or save their income.
“There was quite a lot of resistance at first, as the women were quite happy to wait for their husband to hand out the money to them. But we helped them understand the benefits of having their own bank accounts, and being able to make financial decisions for themselves.”

The firm also organises trainings and workshops to give female employees a platform to share experiences and be heard by the wider male community. And its adherence to (and guidance on) sustainable farming increases grower profitability and potential revenue streams, Nina explains, since it requires minimal capital and gives female farmers the tools to cultivate kitchen gardens or other plots of land in a more economically-viable way, too.

Indeed, Nina attributes much of Fresh Express’s success to its ladies. “I’m proud to represent them,” she says. “Most of them have grown with us through the years, and all that we are is due to their years of perseverance and eye for perfection.”

So what next for Fresh Express? The firm, it seems, is embracing the future. It uses cutting-edge technology: blockchain for traceability; artificial-intelligence-based remote-sensing for on-farm monitoring using satellite and drone data; automatic quality-inspection using Machine Vision sensors; real-time quality and pack weight monitoring for each packing station; and is developing eco-friendly packaging. It achieves all this by supporting young people at local, rural engineering colleges, Nina explains.

“I find it extremely satisfying that we are able to make a drop of contribution towards poison-free-food for the world,” she adds, a reformer to her core. “I think it’s important to love life, live it to the fullest – and to leave a memorable footprint.” It’s probably safe to say, she will.