European apple and pear volumes are expected to decline, according to forecasts at Prognosfruit, but the scale of damage from July's heat wave remains unclear 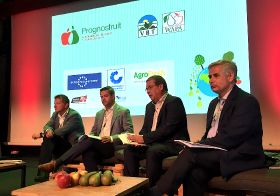