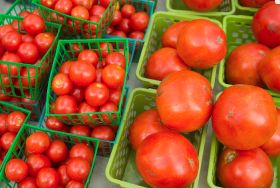 University of Florida (UF) scientists have revealed that, in their quest for a tastier tomato, they are finding traits that they believe will tempt consumers with flavour that "triggers their senses even more".

According to the scientists, they are making "significant progress" on improving the UF-developed Tasti-Lee tomato, which will feature improved flavour and aroma.

“Modern tomato cultivars typically have poor flavour compared to heirloom (older) varieties, but breeding for tomato flavour is difficult due to the complexity of the flavour trait,” said Denise Tieman, a research assistant professor of horticultural sciences at the UF Institute of Food and Agricultural Sciences (UF/IFAS).

Tieman will present the lab’s preliminary findings at the annual UF/IFAS Florida Tomato Institute on 4 September in Naples, Florida.

Tomato flavour comes from interactions between sugars, acids and aroma volatiles, which are the compounds that you smell, Tieman said.

With the new, albeit preliminary, research findings, “We can now use traditional breeding methods to replace the better version of these regions in a modern tomato variety,” Tieman said. Anyone who knows molecular breeding can use this information to breed for better flavor.

“We are using it to add flavour in some Florida tomato varieties,” Tieman said. “Several seed companies have expressed interest in this research.”

UF/IFAS researchers developed and released Tasti-Lee in 2006, and with it, they came up with a tomato that they said had a "fresh-from-the-garden flavour". Not only does it taste good, it’s juicy and red, UF/IFAS experts said.

In her research, Tieman replaces a “bad” version of a gene with a “good” one, resulting in improved flavour. To do this, scientists take flavour traits from an heirloom variety, along with yield, disease resistance and shelf-life from the modern parent. This results in higher levels of desirable flavour compounds in a modern background, Tieman said.