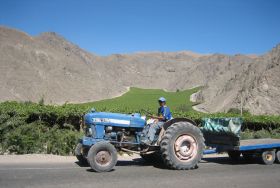 Chilean table grape shipments are expected to reach 70m cartons in 2019/20, a decrease of 6.5 per cent on the previous season.

As the 2019/20 campaign draws to a close, Fernando Sat, president of the Chilean Table Grape Committee, noted that the fall was primarily due to the varietal renewal strategy the sector has been pursuing in recent years.

In spite of the dip, Sat said the campaign had progressed relatively smoothly, with no major adverse climatic phenomena resulting in good quality and prices at anticipated levels.

“Regarding volumes, 2019/20 has shown a significant decrease as a result of the strong change in varieties that the country has been promoting in recent years,” Sat noted.

“For example, we see that Flame Seedless exports, which in 2017/18 totalled almost 7m cartons, will this season reach 2m cartons.”

To date, around 57m cartons of grapes have been shipped worldwide from Chile. Sat pointed out that there has been a sharp fall in exports of traditional varieties in favour of newer cultivars such as Timco, which is now ranks fourth in Chile’s export portfolio with shipments of almost 3m cartons.

“Around 50-70 new varieties have been planted in Chile and most are still in the trial stage so it’s not yet clear which are the best or the worst,” Sat said.

Regarding the effect of coronavirus in the Chilean grape season, Sat commented: “The Covid-19 pandemic has been a great disaster for everyone and has affected the normal functioning of all people and companies, and fruit growing is no exception.

“Fortunately, the disruption at farms and ports resulting from the measures taken by the authorities has been minimal,” he said.

“Nevertheless, it’s clear that this is a very serious problem that will be with us for several more months, and whose effects will endure for several years.”

Sat noted that the main issue has been the availability of containers, as shipping companies had not been able to supply the necessary quantity due to rotation problems with vessels not able to follow their normal itinerary, which was initially seen in China and is not starting to happen in Europe.

He praised the efforts of the industry to overcome the problems thrown up by the pandemic,

highlighting the positive aspects of the current campaign.
“This season, the big winners have been green grapes – although there has been a significant decrease in production, the market continues to favour good quality.

“Regarding red grapes, we’re seeing new varieties coming through with larger berries. Demand has been consistent and we’ve seen excellent acceptance from the market.”

The take-home from this season, Sat said, is that good quality will always been rewarded.

“This season we can once again feel that the market has reacted positively to good fruit quality, and this has been reflected in terms of both prices and sales volume,” he said.