Overall fruit consumption in Japan has declined in 2020 with prices rising, however, bananas and kiwifruit have bucked the trend 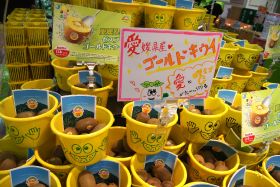 Through the first six months of 2020 the price of fruit in Japan was the highest it has been for the decade, resulting in lower levels of fruit consumption.

According to data from Japan’s Ministry of Internal Affairs and Communications, in the six months to 30 June 2020, the average price of fruit per household in Japan was ¥518 (US$4.86) per kilogram.

As a result of these prices, overall fruit consumption dropped even though expenditure rose.

For the first half of 2020, fruit consumption dropped to 31.52kg per household, the second-lowest total since 2011 and 5.5 per cent below the ten-year average.

Two categories that have bucked the wider trend are kiwifruit and banana, both of which had historically strong starts to the year.

From January to June 2020 banana consumption reached its highest levels since 2012, totalling 9.88kg per household.

Kiwifruit consumption also broke records with 1.233kg consumed per household, the most consumed through the first six months of a year in any year.

“Japanese consumers perceive bananas and kiwifruit to be the healthiest of fruit, and have consumed greater amounts as a result,” Moriya said.