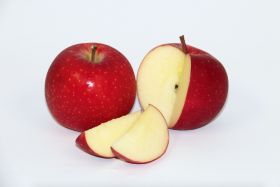 The Gala category has become one of the leading apple categories in the world, and has become extremely important for the South African apple industry, representing 17 per cent of all plantings.

However, it is now set for significant change, with newly developed strains playing a significant role.

Growing Gala’s is not without problems and the search is on for new improved types which will have better and more consistent colour, therefore enhancing the category at consumer level.

At the same time, new varieties must offer growers better production and packouts – in short, better returns on the farm.

Stargrow’s Evergala variety is expected to play a significant role in transforming the South African Gala category. It is about a week earlier than normal Gala’s and is bright red.

When looking at improving Gala varieties, the problem is often that even when you find a new full-coloured apple, it may revert back to the normal external appearance of a striped Gala after a few years.

Evergala has been tested at production level and Stargrow said that it does not revert back, and that it consists of all the characteristics the market knows and loves, but with better colour development.

Evergala has been named after the man who discovered it, Stargrow’s Evert van der Westhuizen. On an orchard tour at the farm Suikerbosrand in the Koue Bokkeveld region of Ceres, he noted a new mutation on a standard Gala tree which was quite unusual.

“What stood out was the bright colour and how much earlier the fruit started colouring compared with the fruit on the trees around it,” he said.

In the Far East in particular, where South African Gala’s have to compete with well-coloured apples from New Zealand, South African marketers are looking to be better than the competition.

According to Stargrow, Evergala certainly meets the requirement. "It appears bright red all round and because it is early it also assists growers in extending their marketing window,” commented Stargrow’s Nikko Maree.

Tobie van Rooyen, technical advisor to the South African Apple Industry who viewed Evergala at Suikerbosrand, explained that the cultivar compared well with other new full-red mutations of Gala.

“Despite the fact that it is still early in the life of the cultivar, it will be able to stand its ground amongst these new Gala types," he confirmed.

The move towards improved Galas in South Africa seems to be relentless, with clear long-term implications for older orchards as growers move to plant new cultivars such as Evergala.

It is expected that the first commercial volumes of Evergala will be exported within three years. “It has been planted in the Ceres region and tested in all other apple growing regions in the country. Our feedback from growers is extremely good,” added Maree.