The newly agreed export protocol between Turkey and Thailand is welcome news for Turkish exporters, with hopes that apples are just the beginning 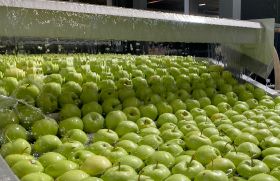 At the end of 2020, the eagerly awaited protocol between Turkey and Thailand was at last finalised, allowing Turkish apples to enter the Thai market.

Following last May's visit of Thai authorities to production areas in Turkey, quarantine officials from Thailand’s Ministry of Agriculture and Cooperatives expressed satisfaction with what they saw.

Oguz said that specific health, production, supply chain and food safety conditions had to be met prior to loading, while a cold treatment procedure needed to be applied during transportation.

According to Oguz, Anadolu Etap has been the first Turkish company to ship its apples to Thailand, arriving at the port of Laem Chebang.

“Our apples are grown in one of the biggest farms in Balikesir, with an acreage of 1,000ha,” said Oguz. “In addition, we also have a farm for organic apple production of more than 150ha. Since our trees are reaching full maturity, we’re expecting an apple harvest of more than 30,000 tonnes.”

Anadolu Etap’s apples are already exported around the world, mainly to the Middle East and South-east Asia.

“The Thai market is very new to us and we are trying to go step by step with reputable customers and partners in order to avoid any mistakes,” said Oguz. “We need to investigate and understand this market. We are sure that the protocol for apples is just the start, and that in the near future we will be able to introduce our other products as well.”

Turkey’s apple exports were worth US$90m in 2019, and the Turkish apple industry is keen to expand its presence in other Asian markets, including China, South Korea, Malaysia and Singapore.

In addition to apples, Anadolu Etap’s main products include peaches, nectarines, apricots, cherries, pears and pomegranates. The company has expanded its field of production activities and operations every year since its establishment in 2010 to serve more than 60 countries today.

The company has eight farms, established on 3,000ha of land located in six different regions in Turkey, in addition to three fruit juice processing plants and one packhouse. The volume of fruit processed in its packhouse and factories recently exceeded 350,000 tonnes.

According to the company, it cooperates with a large number of producers, providing social, economic and environmental benefits through its contributions to the local economy, rural development and employment.

As well as achieving the 'Covid-19 Safe Production Certificate', the company has also signed up to the United Nations Global Compact, committing to work in compliance with international principles on sustainability. Anadolu Etap recently published its second sustainability report.