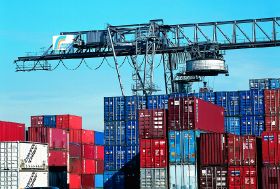 Swiss-based logistics group Kuehne & Nagel has reported its results for the first quarter of 2009, with gross profit falling 7.1 per cent to €950m and turnover down from €3.5bn to €2.82bn.

However, the effect of the recession-related decline in areas of the group's transport and logistics business was minimised by an extensive cost-cutting programme and an increase in sales activities.

"The solid performance in the first quarter confirms the efficiency of the measures we have taken at an early stage and implemented on a worldwide scale to adapt our enterprise to today's economic environment," said group CEO Reinhard Lange. "Since it remains impossible to predict by when the global economy will recover, we will adhere to our dual strategy of rigorous cost control with a commitment to market share expansion."

The negative trend from the fourth quarter of 2008 continued in seafreight, with a 13 per cent volume drop and a 4.7 per cent decline in operational result.

The airfreight business was "particularly affected" by the slowdown in the first quarter, with a global market decrease o f over 20 per cent year-on-year, while the operational result for road rail and logistics fell 45.5 per cent compared with 2008.