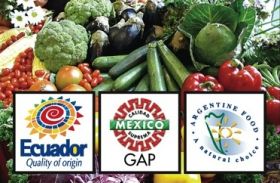 Ever since Chile benchmarked its national Good Agricultural Practices (GAP) standards against GlobalGAP four years ago, fellow Latin American neighbours have been clambering to follow suit in a bid to gain worldwide recognition for their compliance with internationally-recognised food safety and quality parameters.

In the last eight years, Mexico, Colombia, Ecuador and Argentina have all jumped on the national branding bandwagon and, as a result, helped to propel their country’s image to new levels.

Just this year, Argentina unveiled its first-ever quality seal, ‘Argentine Food: A Natural Choice’, to distinguish the South American nation’s produce in the global marketplace. Developed by the Argentine Secretary of Agriculture, Livestock, Fishery and Food (SAGPyA), the seal will be displayed alongside suppliers’ own product brands, while the logo will be displayed at all international trade shows attended by Argentine foreign export agency Fundación Export-ar and its members.

Ecuador has made significant strides during the last couple of years in its quest to become a quality and sustainable supplier. In 2007, those efforts, supported by Ecuadorean export promotion agency Corpei, culminated in the successful launch of the Ecuador Quality of Origin label in the presence of thousands of visitors at Fruit Logistica.

Neighbouring Colombians have also embraced their quality seal, ColombiaGAP, with increasing exporter groups developing schemes to encourage growers to take up the new label. So far, ColombiaGAP covers only exotic fruits but given the importance of the exotic sector, many claim the label will play a vital role in the development of the country’s export industry in the years to come.

By far, Mexico has achieved the most impressive results with its own national brand, Mexico Supreme Quality, launched in 2001. Since 2000, the Mexican trade office estimates fresh produce exports have grown by 19.3 per cent a year. Indeed, in the last six years, Mexico has stepped up its efforts to open up new markets for Mexican agricultural products. Nationally, 102 companies have signed up along with eight supermarket chains.

This excerpt is taken from articles featured in the supplement Trade Latin America 2008, which is now available free to all subscribers