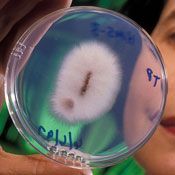 The new strain, called Tropical Race 4 (TR4) emerged in the Philippines in the 1990s, according to the Cincinnati Enquirer. The disease has since spread to northern Australian and even China.

About 50,000ha of banana plants have been destroyed by the disease so far.

The fungus has not become the industry-ending plague Panama disease was in the 1950s, but the threat is real, according to Randy Ploetz, a University of Florida plant pathology researcher and a leading authority on diseases affecting bananas.

“You'll never get me to say that it could get here tomorrow and that within five years we'll be without bananas or that they will be $10 a pound, but it is a serious problem,” he said.

“International quarantines will not work. If it did get over to Latin America somehow, it is almost impossible to stop. When and if that will happen? No one can say for sure.”

“We believe it is a very limited threat and would take many, many years to spread even if it does move out of Asia,” he said. “We believe that it is very limited and we are doing all we can to pre-empt and prepare.”

The company is helping to fund research into new banana breeds, and has introduced many quarantine and protective measures to their farms worldwide.