After overcoming financial difficulties, the joint venture glasshouse complex is to expand with a new tomato facility 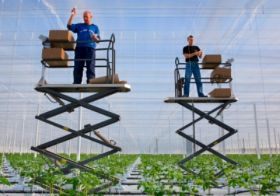 Thanet Earth, the UK’s largest production site for tomatoes, peppers and cucumbers, has announced plans for the construction of a fourth greenhouse to add to its existing three facilities in Thanet, Kent.

The announcement by project partners Fresca Group, A & A, Kaaij UK and Rainbow marks the first new development at Thanet Earth since it was constructed in 2009, at which time it was expected to be the first stage of a seven glasshouse, 55ha site.

Since its opening, Fresca said the Thanet Earth business had managed to negotiate its way through difficult times in the industry and the economy at large.

Despite this, the group said the project had “made extremely good progress” financially, moving from large losses in year one towards a modest profit in year three, although it admitted that the pressures on the business had been “enormous”.

In a statement, Fresca executive chairman, Chris Mack, said: “The plan for the site originally had the first three greenhouses constructed as phase one, with the remaining greenhouses following relatively quickly.

“We did, however, choose possibly the worst time to venture into this project!

"The financial climate has left funding scarce, cash reserves are guarded fiercely and plans have been slower to come to fruition.

“This has been a pressure on Thanet Earth overall, as the financial projections for the site relied on its scale of production for its profitability. To remain under 50 per cent constructed yet to turn an operating profit in year three is testament to the hard work of everyone at the site.”

The new greenhouse, which is expected to cost £17m, will be dedicated to tomato production, with construction projected to start this summer ahead of an anticipated first crop early in 2013.