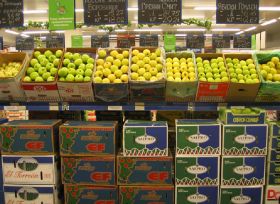 Imported Southern Hemisphere apples on sale in a Russian supermarket

While Russia's actions in Ukraine continue to dominate headlines in the mainstream media, Eurofruit understands the country's buying power on international fresh produce markets is being eroded significantly – in the short term at least – by the ongoing devaluation of the rouble and a recent dismantling of parts of the country's wholesale network.

This week, the currency fell to an all-time low against both the US dollar and the euro, as well as continuing a sudden decline against the Argentine peso that began in the last week of January, making it even more expensive for importers to buy product from overseas.

Key items such as apples, bananas and citrus are traditionally imported in large volumes by Russian buyers around this time of year, with countries including Argentina and South Africa doing significant business in the country.

"The rouble has been devalued by around 20 per cent in recent weeks and this is making the situation difficult for Argentine exporters," said Enrique Gristanti of apple and pear exporter Tres Ases.

"We are doing all we can to fulfil our commitments and maintain the relationships we have built up over the years, rather than thinking about diverting fruit to other markets."

Damian Segal of 770 Fruits, said he viewed the situation in similar terms.

"Russia is an important market for Argentina and one that is not easily replaceable," he commented. "Although we're worried about the exchange rate situation we are determined to meet with our obligations. The likelihood is that some fruit will find its way to other markets, but not a significant amount."

However, it is Moscow's determination to shut down significant parts of its fresh produce wholesale network that might have a more lasting impact on the composition of the country's import market, contributing to an already downward trend in terms of fresh produce consumption.

Last October, the business faced major disruption after Moscow officials imposed a three-month shutdown of Pokrovskaya, the country's largest fresh produce wholesale market, ostensibly because of concerns over hygiene standards at the centre.

Companies based at the 120,000m2 market, also referred to as Stupinsky, were apparently ordered to vacate the premises immediately, leaving vast inventories of fruit and vegetables to rot.

Since then, Moscow has made a concerted effort to tidy up the country's fresh produce wholesale trade, according to one leading Italian trader with day-to-day involvement in supplying the country.

"Besides the soon-to-be-confirmed closure of Prokovskaya, the new Moscow municipalilty decided to do some tidying up in order to make the capital more presentable, particularly ahead of the Olympics in Sochi," explains Thomas Drahorad of NCX Drahorad.

"Lots of tourists will transit via Moscow and the authorities decided to close around thirty or so city markets where class-two fruit and vegetables were sold. We're talking about structures which were unpresentable as far as rich Olympic tourists were concerned, but which played a central role in the economy of the sector."

He added: "It cannot be ruled out that, besides the official reasoning which centred mainly around hygiene and sanitary factors, the measures to close [these markets] were taken to favour Russia's powerful retail lobby."