Global stars post selfies in support of Barcelona's Dani Alves, who had a banana thrown at him mid-match 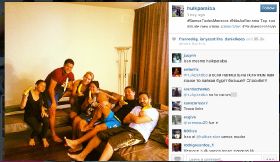 Russia-based Brazil star Hulk gets his family together to show their support for Alves on Instagram. Photo: hulkparaiba

Footballers from across the globe have rallied around Barcelona defender Dani Alves after he took a stand against racist abuse by eating a banana thrown at him during a Spanish league game – by posting photos of themselves and their loved ones online eating bananas.

Inspired by an initial message posted on Twitter by Neymar Da Silva (who also plays for Barcelona), other star players including Brazilian international Alves' compatriots Givanildo Vieira 'Hulk' De Souza (who plays for Zenit St Petersburg in Russia), Fernandinho Luiz Rosa (a midfielder for Manchester City), and Oscar Dos Santos, David Luiz and Willian Borges Da Silva (all of whom play for Chelsea) were among those sharing photos on Instagram in a show of solidarity, using variations of the hashtag, #weareallmonkeys (#somostodosmacacos).

The Brazil full-back was preparing to take a corner at Villareal's El Madrigal stadium on Sunday (27 April) when the banana landed on the pitch next to him. Alves, 30, responded by eating it.

Fifa president Sepp Blatter, meanwhile, also took to Twitter to condemn the treatment of Alves: "What @DaniAlvesD2 tolerated last night is an outrage. We must fight all forms of discrimination united. Will be zero tolerance at #WorldCup," he tweeted.