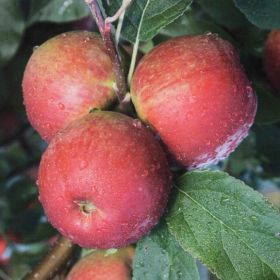 A new variety of apple developed specifically for the city of London has today been named the Core Blimey.

The London Orchard Project, a charity that promotes orchard and fruit tree growing in the UK capital, announced the decision following a national competition to name the new fruit.

Developed by the project's founders, Core Blimey is said to be a unique new variety and is the first apple specific to London to be developed in over 60 years.

In partnership with the Trees for Life nursery, the London Orchard Project bred the variety to be strong, durable and resilient to what can be harsh conditions for fruit trees in the city.

The charity plans to plant 100 Core Blimey trees in various areas across London to celebrate its creation.

These will be placed in 40 orchards in public spaces, parks and schools in the city throughout December, each of which will eventually provide Core Blimey apples to London’s local communities.

"The Core Blimey is a perfect name for the new variety," commented Kath Rosen, the project's chief executive. "It encapsulates London,  it’s fun and – as a cockney term of surprise that dates back to the 1880s – the phrase has a lot of history."

She added: "We are looking forward to seeing the Core Blimey thrive, becoming a well-recognised variety of London fruit."

In addition to its resilience and adaptability to changeable conditions, the Core Blimey has been developed to offer high yields of delicious sweet apples.

The trees themselves are described as "very easy to grow", even for less experienced growers.

"The trees will brighten up the environments they are planted in as well as provide access to free, delicious and healthy fruit to all surrounding communities," she said.

Communities around the 40 new orchards are reportedly planning celebrations around the planting of the trees, which will be close to schools, parks and public areas in residential spaces.

Members of each community will come together to assist with the planting in the coming weeks.

The winner of the competition to name the new variety will also win their own Core Blimey tree, taken from the original batch of 100.