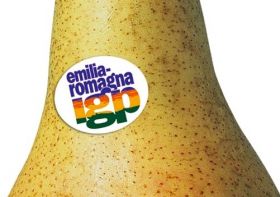 The famous Abate Fetel pear of Italy’s Emilia-Romagna region was the star of a tasting event for produce professionals that took place at Eataly NYC in NEw York on 13 November 2014.

The specially-designed meal, prepared by Eataly NYC’s Chef Nicoletta Grippo, was a a gastronomic journey starting with a Prosecco and amuse-bouche reception, followed by a three-course tasting showcasing this versatile fruit, paired with Italian wines.

Long a favourite among European consumers, the slim, green-skinned, russet-tinged Abate Fetel pear from northeastern Italy is high in sugar with a white, aromatic flesh.

It is considered a delicacy throughout Europe, served at Michelin-starred restaurants across the Continent. It became available in the United States in 2013.

The tasting event was sponsored by Organizzazione Interprofessionale Pera (O.I.), the trade group representing Italian pear producers, established to promote the pear sector, especially the Abate Fetel variety, not only in Italy but also in export markets worldwide.

The Eataly NYC event, focused on the Abate Fetel pear, comes in advance of the variety’s arrival at US points of sale.

At approximately 300,000 tonnes annually, Italy is the largest European producer of the Abate Fetel pear, and is Europe’s largest producer of fresh fruits and vegetable overall, making it a key player in the global produce market.