Long believed to have been created in France, Belgian officials are seeking for potato fries to be officially endorsed by UNESCO 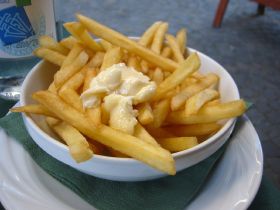 A bid to get potato 'fries' recognised as a part of Belgium's cultural heritage has been launched.

Long believed to have been created in France, Belgian government officials are seeking for the food item to be officially endorsed by the United Nations’ Educational Scientific and Cultural Organisation (UNESCO).

According to Mail Online, both the French-speaking community of Wallonia in southern Belgium and the German-speaking community in the east have announced that they’re joining forces with their Flemish cousins in the north to set up a petition calling for the culinary item to gain UNESCO status.

If successful, it means that Belgian fries will be put on a par with the Tower of London, Stonehenge, the Grand Canyon and the Kremlin in Russia.

Belgian fries are traditionally sold in a paper cone from a ‘fritkot’ (a shack or trailer), of which there are around 5,000 in Belgium.

To become recognised by UNESCO, the products need to be endorsed by a minister of culture - of which Belgium has three.