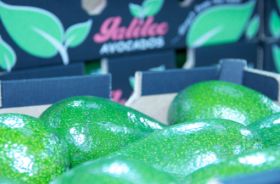 According to Kanat, the insurance fund for agricultural damage caused by nature, last weekend's storms, snow and frost have caused over ILS 50m (€10.7m) worth of damage, with farmers reporting more than 600 potential claims.

Exceptionally strong winds have damaged hundreds of hectares of avocado and citrus production, mainly in the centre of the country, with ripe fruit bring blown from the trees.

Protected cultivation – greenhouse tomatoes, herbs, banana and flowers – has also been damaged due to the tearing of the plastic covers and subsequent flooding from the heavy rain.

In the southern part of the country, heavy hailstorms have damaged both potato and onion crops.

Olga Fedishenko of Israeli exporter BeFresh said that the extent of the damage was only just becoming clear, with peppers, cherry tomatoes, avocados and radishes all affected.

"The beginning of the year has been very hard for our growers," she told Eurofruit. "The weather has not only damaged the fruit, it has also stopped producers from picking the fruit. Volumes are therefore down."

The one silver lining for Israeli companies appears to be the subsequent rise in prices, a welcome relief from the low returns experienced in the first week of the year.