Country's exporters find their options have broadened since last summer, with the EU now also a viable destination 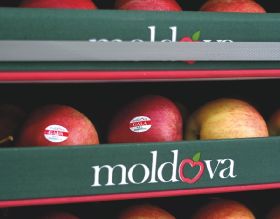 Moldova, which sits between Ukraine and Romania, finds itself on the front line in an international tug-of-war involving the world’s major superpowers.

But for several of its fruit exporters, the geopolitical flux created by those tensions appears to be creating new opportunities for them to grow their business.

In December, members of the European Parliament voted in favour of opening the EU market to its apples, grapes and plums – a move designed to compensate producers for losses incurred on what they described as a “politically motivated ban” applied to the country’s fresh produce imports last summer by Russia.

But now, Russia has had a change of heart, having always insisted the ban was based on concerns over phytosanitary standards, and not linked to the situation in eastern Ukraine.

As a result, around 60,000 tonnes of apples from Moldova could be sold in the Russian market after Moscow announced it was ready to re-open its doors, at least partially.

According to a press release issued by Rosselkhoznadzor, Russia’s Federal Service for Veterinary and Phytosanitary Surveillance, approved suppliers will be allowed to send their apples to the country as part of a trial.

“As a result of bilateral consultations, [we] made a decision on experimental importation of apples into the Russian Federation from 26 February 2015.”

Apples from the areas of Grigoropolsky, Dubossarsky, Kamensky, Rybnitsky and Slobodzeysky Raions will also be permitted entry.

However, any new breach of import standards will apparently result in the supplier concerned being banned again.

While Russia’s ban on Moldovan fruit was not officially part of the Ukraine-related embargo on all EU, US, Australian and Canadian fruit and vegetables (the ban was actually imposed one month earlier), it was regarded in some circles as punishment for Moldova’s increasingly close ties with Europe.

For those Moldovan suppliers named on Rosselkhoznadzor’s whitelist, the news that Russia is open again means their options in terms of export markets have now broadened, even if most of the fruit heading to the EU after it removed duties on Moldovan imports – including 40,000 tonnes of apples and 10,000 tonnes each of grapes and plums – was expected to be sold in Romania.

Peter White, a marketing specialist who works for the USAID-backed agricultural development group DAI Moldova, works with growers in the country to diversify and improve their production in order to access new markets.

“Indeed, the geopolitical situation for Moldova is challenging, but as always with challenges there are also opportunities,” he commented.

“Understandably, there is an attachment here to the Russian market, but this reliance has brought its own problems.”

White and his team of team of locals, based in Chisinau, recently signed their first deal with Carrefour in Romania to pack and ship Royal Gala, Golden Delicious and Granny Smith-type apples to Bucharest.

“If we can make this work, then growers should see better returns and realise there are alternatives to the Russian market.”