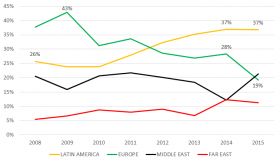 For the first time in its history, Chile has shipped a higher proportion of its apple exports to the Middle East than it has to Europe this season.

Overall, Chilean apple shipments up to week 13 have reportedly fallen to 127,000 tonnes, their lowest level in eight years, as a result of lower demand particularly in Europe and Asia.

According to iQonsulting, which published the news based on trade data, the volume shipped to Europe by the end of March was 42 per cent lower this season than it was during the equivalent period of 2014.

The analyst also reported an average per-box decrease in prices for Chilean apples arriving in the Netherlands of €2 compared with the year-earlier period, despite a downturn in volumes exported not only from Chile but also from neighbouring Argentina.

According to figures released by the World Apple and Pear Association, stocks in the European market over the past three months have been running approximately 10 per cent higher than last season, a situation created by the largest Northern Hemisphere crop in a decade – especially in Italy and Poland – and by Russia’s import ban on EU fruit.

In other markets, the fall in Chilean shipments has been less pronounced. Exports to the US during the same period were reportedly down 4 per cent while in Asia the shortfall was 20 per cent.

“Although the Chilean producers confirm that the quality of the picked fruit during this season is better in terms of size, it is also reported that amount of fruit sent to storage is greater than previous season,” commented iQonsulting’s Gonzalo Salinas.