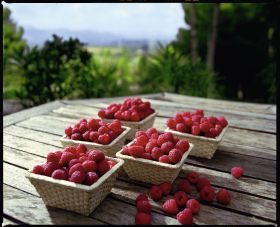 SanLucar is to invest in the first ever large-scale raspberry plantation in Tunisia. The company has received a €4m loan from the European Bank for Reconstruction and Development (EBRD) to develop production for export to Europe and the Middle East.

The company’s Flor’alia Farm has been involved in small-scale raspberry production in Tunisia for two years and this latest venture will significantly boost supplies during the winter and spring months. Production will focus on new varieties developed at the company’s research and development facility and in conjunction with breeders such as Plant Sciences International and Planasa.

“We are currently working on the implementation and operation of approximately 30ha of production and the aim is to achieve up to 70ha,” CFO Michael Brinkmann told Fruitnet. “It is possible and indeed very likely that we will develop more farms with berry production in the near future in Tunisia.”

Brinkmann noted that in addition to its favourable growing conditions, Tunisia had an “excellent pool of young agricultural talent” that the company was educating and developing.

Stephan Roetzer, owner and CEO of the Sanlucar Group, said: “we are constantly looking for the best farming regions around the world. The Finca Flor’alia in Tunisia is a plantation with successful future prospects where we will continue to invest in the development of a modern and sustainable agriculture”.

“Flor'alia Farm owns a plantation in Tunisia with great prospects, and as a result of this new project we'll be able to introduce new varieties, expand and modernise our production.”

Valencia-based SanLucar sources its high-quality products from partner farms worldwide, as well as from its own production sites in Europe, Tunisia, South Africa and Ecuador. The company has a strong distribution and logistics network particularly in Austria and Germany.

The EBRD has been investing in Tunisia since September 2012, providing financing so far of close to €250 million in 17 projects. The Bank provided technical assistance support to more than 130 small and medium-sized Tunisian enterprises.