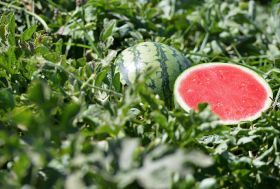 Mini watermelons are gaining popularity, but the large watermelon varieties will continue to have a following.

That is the verdict of Israeli seed specialist Hazera's global product manager for cucurbits, Mark van der Zouwen, who was speaking after the group held an open day in the south of Israel where new varieties were on display.

“The watermelon market is undergoing a very dynamic trend,” he notes. “The seedless mini watermelon is gaining market share quickly, in many markets.”

One of the new varieties on show at the open day was Ocelot, a seedless mini watermelon, around 2kg, which displays a tiger-patterned outer layer, combined with crispy and tasty flesh.

“This variety has been introduced successfully this year, at an international scale; we sell the seeds to growers in the US, but also in Mexico and Central America, who then provide the fruits to the US market,” explains Van der Zouwen. European growers are also starting to produce this variety.

The seedless mini watermelon market has doubled in the past decade, according to Hazera, with reasons for this including smaller households, a trend towards more economical consumption, mini watermelons being lighter, easier to carry and having a more consistent quality, as well as the wish to reduce waste.

This trend will continue and is expanding towards Europe as well, Hazera predicts.