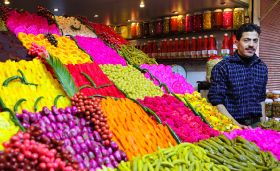 Syrian producers are seizing the opportunity created by a lull in fighting to export fruits and vegetables to Russia.

The importer is in discussions with local supermarkets to establish regular programmes from Syria, which could help plug the gap left by the ban on Turkish food after the downing of a Russian military plane by Turkey last November.

However, Panesh said the poor quality of Syrian packaging was hampering trade.

Adyg-Yurak has invested more than US$3m in boosting the logistics network between the two countries and is said to be planning further investments in establishing a modern packaging operation in Syria in the next six months, bringing its total investment to US$10m.

“This would enable us to import 3,000-5,000 tonnes of Syrian fruits and vegetables every week,” Panesh said.

Syria is one of several countries with which Russia is negotiations to fill the gap in food supplies left by the Turkish ban.

According to a report in The Guardian, Syria’s agricultural sector is becoming increasingly vital to the country’s economy in spite of the severe disruption caused by the war, with its share of GDP expected to have risen from 17 per cent to 29 per cent between 2010 and 2015.