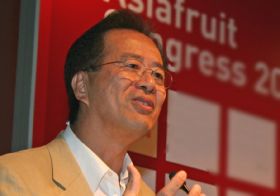 The Chinese authorities have issued an arrest warrant for New Zealand kiwifruit marketer's global president of sales and marketing, Yu-Jan Chen, in connection with a recent high-profile fraud case involving the exporter, it has emerged.

During a question-and-answer session in the NZ parliament on Tuesday, 26 March, politicians made the first official reference to the fact that Chen was wanted by fraud investigators looking to prosecute him for his alleged role in the completion of invoices registering lower prices for Zespri Gold kiwifruit.

Winston Peters, leader of the New Zealand First party and a former deputy prime minister, asked Joyce if he was concerned that the Zespri case would damage New Zealand's trade and diplomatic relations with China, before proceeding to mention Chen by name, stating that there was "a detention order placed on him".

Addressing Peters' concerns, Joyce said: "This case does serve, I think, as an important reminder to all New Zealand companies operating in international markets that they must ensure that they and their management understand and comply with local laws, no matter which market they operate in."

Earlier this month, a Shanghai Court found Zespri's China-based subsidiary, and one of its employees, guilty of helping Zespri's former independent importers report false customs duties between 2008 and 2010.

Asked by Peters if he believed the case had hurt New Zealand's international trading reputation, he responded with a curt "no".

Chen, who is still listed as a director on Zespri's website, is believed to have left China and retreated to his home in Taiwan.

Zespri has declined to offer much in terms of comment about the specifics of the case and the people involved, but speaking exclusively in the March 2013 issue of Asiafruit, the company's chief executive Lain Jager denied reports that Chen had been forced to hot-foot it out of China.

Jager said: "Yu-Jan lives in Taiwan and he is being cautious about travelling to China until the current legal case is resolved, but it is not correct that he fled China."

Chen's former colleague Joseph Yu, a US national who worked under Chen at Zespri's office in Shanghai, is understood to have begun a five-year prison sentence for his supposed part in the fraud.

Independent importer Liu Xiongije was convicted last year for his part in the deception.

He was forced to pay a fine of US$5.8m, as well as a similar figure in underpaid customs duties, before being sentenced to 13 years in prison. He is currently appealing the sentence.