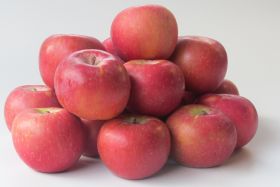 A new, highly coloured mutation of Fuji apple is being touted in South Africa as a cultivar with plenty of chance of success in the coming years, one with the potential to change the fortunes of the country’s growers.

Originally discovered in New Zealand, the so-called Aztec Fuji was brought to South Africa by plant development company Stargrow Cultivar Development and offers an alternative for growers who have generally struggled to produce competitive, high-coloured Fuji.

“Aztec Fuji delivers fruit of an almost full red colour and, with the ability of South African growers to produce fruit of exceptional taste and flavour, will really turn the fortunes around for the Fuji category in South Africa.”

A number of growers – including Pieter Graaff from South Africa’s leading apple marketer Tru-Cape – have planted the apple, which can be grown and marketed by any company.

Around ten containers will be shipped this year to the Far East, where it is understood the fruit has already been sold to selected customers.

This year, 900 bins were harvested from trees supplied by Stargrow. In 2017, production is expected to double and the variety’s marketing is expected to gather pace.

Aztec Fuji is already very popular in the international trade because of its consistent red blush colouring and the sweet, juicy flavour for which Fujis are known.

“For South Africans, the arrival of Aztec Fuji is a key moment in the development of the apple industry,” says Calla du Toit, a grower based in Ceres and a member of packer-shipper Ceres Fruit Growers and the Tru-Cape branding group.

“With this variety growers have obtained a pack-out of 80 per cent in terms of colour, compared with 40 per cent of the traditional Fujis.”

Maree adds: “With the history of Fuji in South Africa, it is not surprising that growers adopted a wait-and-see attitude with Aztec Fuji when it first arrived in the country. The fruit harvested this year clearly tells the full story and we anticipate great interest in future.”

Du Toit says that although most of this first significant harvest of Aztec Fuji will be exported to the Far East, the variety is also expected to do extremely well in the South African market.

“We are classified as a red apple market and Aztec Fuji, with its great eating quality, will be a consumer favourite.”

He says Tru-Cape will promote significant plantings of Aztec Fuji amongst their growers, all of whom are located in South Africa’s major apple-growing regions.

Maree says it is Stargrow’s policy to develop and promote varieties which will significantly benefit growers and improve their long term sustainability: “We are delighted with the progress with Aztec Fuji in South Africa and look forward to working with all growers in this regard.”