Finland has been named home to Fujitsu’s newest vegetable factory 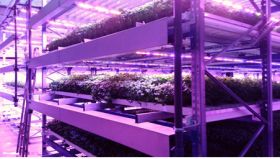 Fujitsu Greenhouse Technology Finland, jointly financed by Finland’s Robbe’s Little Garden and Fujitsu, will begin full-scale production in the first half of the 2017 financial year at the new plant factory.

“Fujitsu and Robbe's Little Garden aim to grow and deliver a steady, year-round supply of vegetables, such as baby greens and leaf lettuce, in Finland, which has few hours of sunlight during its harsh winter,” Fujitsu said in a company statement released 28 November. “Fujitsu also aims to package the know-how and cloud services resulting from this business and deploy them throughout the European Union.”