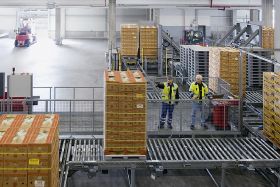 Bananas being brought into HHLA's Fruit and Cool Centre in Hamburg

German logistics specialist HHLA and terminal operator Sea-Invest have invested in modern new mobile crane technology to improve unloading times for deliveries of bananas arriving in reefer ships at the port of Hamburg.

The transshipment unit, a fourth-generation HMK crane supplied by Terex Gottwald, will be used to lift palletised loads and containers from reefer vessels docked alongside the port’s O’Swaldkai multi-purpose terminal and to place them in storage at HHLA’s Fruit and Cool Centre.

According to a press release issued by HHLA, the new crane will enable the terminal to cope with an increasing volume of fruit being shipped in refrigerated containers on the deck of conventional reefer ships.

“With the new harbour mobile crane, we are also very efficiently addressing the increasing number of containers that are now being transported on board the fruit ships,” commented Axel Hoedrich, managing director at the HHLA Fruit and Cool Centre.

“With this modern crane, we are strengthening Hamburg fruit port, which today is the most important location in terms of fruit turnover and fruit trade in Germany.”

There are already two smaller, fourth-generation mobile cranes already in use at the terminal.