Israel’s alleged spraying of herbicides near Gaza has come under fire from NGO Gisha, while the UN condemns settlement expansion in West Bank 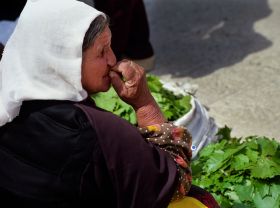 A report from non-governmental organisation Gisha has blasted the resumption of herbicide spraying by Israeli authorities along the border fence with the Gaza Strip, causing damage to Palestinian crops.

On 23 January, according to Gisha, “civilian planes hired by the Israeli air force, sprayed herbicides near the fence that separates the Strip from Israel, in proximity to Palestinian farmland in northern and central Gaza”.

According to the organisation, the Israeli Ministry of Defence claimed the spraying was part of “routine security activity” performed “inside Israel’s territory”.

Farmers in Gaza, however, have argued for years that the spraying causes damage to their crops. Saleh Mohammad a-Najar, a nearby vegetable grower, revealed that chemicals were carried by the wind onto his fields, where he grows spinach, broad beans, peas and lentils. The extent of the damage is currently being assessed.

According to Middle East Monitor, Palestinian officials reported that 170ha of Palestinian land was damaged by such spraying a year ago.

“Using harmful and inaccurate means such as spraying from the air devastates farmers’ livelihoods and destroys the crops they grow with painstaking effort,” Gisha stated. “The environmental or long- and short-term health risks of exposure to the substances is unknown.”

Gisha also highlighted Israel’s policy of sending “heavy equipment, tanks and soldiers to raze and clear lands inside the Strip, as it sees fit”.

Meanwhile, Israel’s settlement movement has been emboldened in the West Bank following the US election of Donald Trump, whose support for Israel has been far more vocal than his predecessor’s, making no mention of a Palestinian state and even countenancing moving the US embassy to Jerusalem.

While much of the media focus has been on the clearing of an illegal Israeli settlement in Amona, in the central West Bank, prime minister Benjamin Netanyahu has announced further settlement expansion in Ramallah, Judea and Samaria, a move condemned by the United Nations.

According to one West Bank farmer, the view of the current situation among Palestinians is somewhat confused. “Some are very optimistic that Trump will have a solution, and some are totally the opposite,” he said. “On the ground, the tension is still very present, and people are looking at Trump’s presidency with a lot of anxiety.”