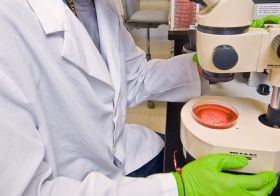 Technological advances have made on-site residue testing a fast, simple and cost-effective solution for fruit and vegetable suppliers wishing to avoid the delay and expense of sending samples to offsite testing laboratories to ensure they comply with regulations governing maximum residue levels (MRLs).

Frutas Montosa has become one of a growing number of companies to invest in its own residue testing laboratory at its headquarters in Málaga. Marketing manager Isabel Izquierdo says the decision to open its own facility came from the company’s desire to gain greater control over the impact of its activities on the environment.

“Pesticides such as insecticides, fungicides and herbicides are widely used in fruit production to protect against pests and diseases but a build up of compounds can be harmful to the environment and to human health,” she explains.

“Our production already meets the food safety standards set out under GlobalGAP but we wanted to take things a step further and set up our own facility to enable us to carry out independent residue testing to ensure that it complies with the quality standards of every market we supply.”

In recent years European Union has tightened controls on the use of chemicals in food production, establishing maximum residue levels on a number of pesticides. At the same time, supermarkets have introduced ever-more stringent rules governing pesticide use, which in many cases are even more restrictive than European legislation.

“The new laboratory allows us to improve the food safety guarantees we offer our clients, ensuring that they meet both legislative and market requirements,” Izquierdo continues, adding that the 100m2 facility is equipped with state-of-the-art testing technology that will significantly increase the number of samples the company is able to test.

The new equipment means we can identify and quantify several a wide spectrum of pesticides simultaneously by using the most up to date techniques including the extraction and isolation of substances through QuEChERS (Quick–Easy–Cheap–Effective–Rugged–Safe), a simple, rapid, effective and inexpensive, way to extract pesticide residues from fruits and vegetables.

These can then be tested using advanced gas and liquid chromatography couple with triple quadrupole mass spectrometry.

“Through the combined use of these two methods our highly trained staff can detect even the smallest traces of pesticide residues, providing added peace of mind to our customers,” Izquierdo says.

Meanwhile, Frutas Montosa recently opened a research and development centre to focus on the development of new products. It provides, says Izquierdo, yet another example of the strategic importance the company places on innovation to help it guarantee the quality and safety of its products.

The company hopes to repeat the success of its range of guacamole and mango salsas, sales of both of which have grown rapidly since their launch.