Following the signing of a protocol with China for Egyptian grapes, exporters are excited by the potential of this huge market 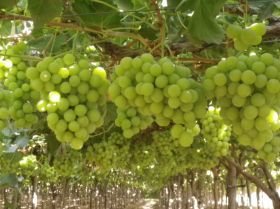 Last year’s signing of a grape export protocol with China has made the Asian giant the number one target for Egyptian exporters this season.

“We are very excited,” says Amr El-Beltagy, product manager at Egyptian exporter Belco. “We can export grapes direct to China for the first time. At Belco, we are giving this our close attention since the market has huge potential. We are looking forward to start exporting from this season. In addition, we have started planting varieties that are favoured by Chinese consumers so we can best serve the market. Besides China, our main markets are the UK, Germany, the Netherlands, South Africa and the Arabian Gulf countries.”

This past winter, according to Hamdy Fayed, chairman of FATA Farms, Egypt experienced an unusually long period of cold weather from the end of November until the beginning of March, with very few interruptions of warmer temperatures. These conditions have helped Egyptian grape growers to produce good yields this season, he says, although production will arrive later than normal, including compared with last season.

“The UK, Continental Europe, the Gulf and Russia are still the main markets for Egyptian grape exports,” he says. “East Asia and Africa are new destinations for us. Quantities are limited, but these are growing markets, especially after Egypt and China signed an agreement to allow Egyptian grapes to be exported direct to China.”